Captain Beefheart was a musical genius

Ex-drummer John "Drumbo" French writes about the Captain Beefhearts Magic Band. The result is a reconstructed madness on 880 pages. 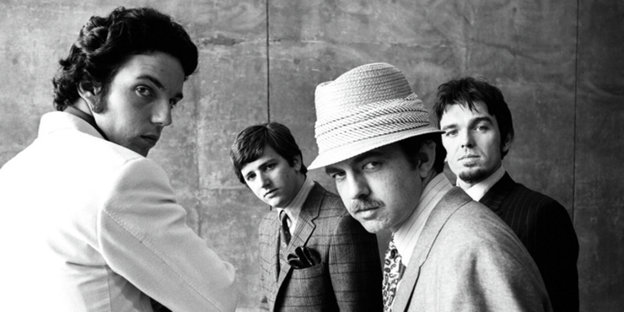 Actually, nothing is ever lost in pop music. Each new generation also produces new fans and professionals for old material. The number of people informed about the most remote attractions of the 50s and 60s of the last century increases with each additional year. Internet forums, special blogs and databases show that not only are there more and more enthusiasts, but also that they often know their objects much better than their contemporaries.

Captain Beefheart is an exception. Long after his active days as a musician (1966 to 1983), he was discovered again and again by new generations as the most unbelievable thing that rock music has ever produced. But in the last ten years the joy of discovery for this work has decreased significantly from around a dozen still exceptionally huge albums. Beefheart is no longer gaining fans.

The brute individualism, the excessive macho stubbornness, the abysses of old-world artist madness are all no longer particularly highly traded attractions for a generation that likes more atmosphere and weirdness in obscure treasures of the past. The monumentally individual voice comes too close to the listener, the high-potential special surrealism and the animalizing natural poetry of the captain and the wacky polyrhythms of the Magic Band come across too personally today.

Captain Beefheart (bourgeois Don Van Vliet) first appeared in public with the Magic Band in the mid-sixties. The mixture of tough blues phrasing and abstract unison freakouts related to free jazz earned the 69-year-old singer and saxophonist the reputation of a difficult artist. Frank Zappa, with whom Beefheart went to school, published the two masterpieces "Trout Mask Replica" (1969) and "Lick my Decals off, Baby" (1970). Beefheart retired from the music business in 1982 and has worked as a visual artist ever since.

John "Drumbo" French joined the Magic Band in 1966 at the age of 17 and played drums in important band periods. Since 1982 he has also been active with other musicians and as a soloist.

Even if you hear Beefheart today, you invite an intrusive, confusing artist into the house. The crazy beats are not simply thought out cleverly, they are really played by guys in pain and harsh laughter who mean it very, very seriously - and at the same time somehow zombie-like, they don't know what they're doing.

The support of the eccentric

John French let Beefheart ruin his life for a long time, it could be said, and at the same time this endlessly entertaining eccentric gave French meaning to his existence. Despite all the humiliations, exclusions and exploitations, French, whom Beefheart named Drumbo, kept coming back to him - and Beefheart was dependent on him.

Beefheart's Magic Band never functioned without a musical director, a friend who could translate Beefheart's idiom into a language musicians understand from verbose explanations, brief piano sketches, and demonstrations on kitchen utensils. Drumbo was probably a leader in this: he created a kind of score for what is probably still the most stunning Beefheart album, the double album "Trout Mask Replica", next to its immediate successor "Lick My Decals Off, Baby" - and fell out of favor: Even today he has no credit on the album. Who is playing the over-present drums? Drumbo and Trotsky are missing in the drag-surreal band photo after Stalin's retouching.

Nevertheless, a few years ago Drumbo was the driving force behind a kind of historical-critical edition of "Trout" along with other rarities on 5 CDs, called "Grow Fins". The liner notes for this project consist of memories and interviews in which French endeavors to reconstruct processes that are difficult to reconstruct in detail. They also represent the core of his tightly printed 880-page book "Beefheart: Through The Eyes of Magic", which has now been published.

One could say that it is the revenge of ultra-precise bean counting on a commanding and ailing genius who is probably an inexhaustible source of delicious ideas in equal parts as a desolate show-off who tells the same stories over and over again. Ironically, Beefheart, bourgeois Don Van Vliet, who hid his whole life behind a chain of myths and half-truths, is meticulously reconstructed from his everyday life here from car trip to supermarket visit.

But it's not revenge, Drumbo has the best of intentions. The world should know how it really was. Some stories, parts of which you have already heard, read completely differently. The famous Portuguese sculptor mentioned in most of the biographies, who is said to have discovered the young Don in elementary school and funded him with scholarships, was certainly not famous, if at all sculptor, if he ever existed. It seems to be true, however, that the move of the Van Vliet family from the almost urban Glendale to the hopelessly remote desert of Lancaster had a lot to do with the family's desire to save the young Don from the influence of homosexuality that supposedly emanates from all artists.

At that time, Lancaster was not only home to the young Zappa and the young guitarist Ry Cooder, who was brilliant in early Magic Band editions but intimidated by the manners among the freaks, and the almost complete first line-up of the Magic Band already existed, Beefheart she only had to tear it under the nail.

French himself is proud of the celebrities, from Ornette Coleman to Paul McCartney, who cross the path of the Magic Band. What is more exciting for the reader of this reconstruction, however, is that the entire Southern California school of weirdness was the work of a few school friends who met again and again. Beefheart and Zappa were just the best known. All of them don't like each other very much, but they are often surprisingly helpful and, above all, loyal: One clings to one another as if the world out there, on which one really had a tremendous influence, could not really be trusted. French, who is not the only voice in this study, which fluctuates between diary preparation and oral history and attests to the loss of the world to those involved, their managers, their record companies, and indeed the entire generation, does not find anything really important that happened outside of this southern California conspiracy .

On the one hand, the positivist mania for collecting fragments of life is as fascinating as Pynchon on confession drugs. On the other hand, focusing on a few overarching questions would have done well. The prehistory of the LA-specific phenomenon of freaks and freak out, the influence of little-documented and also here rather marginally treated missing links between freak out, Fluxus and free love sects like the legendary types Vito and Carlo Franzoni, who keep coming back appearing in relevant stories could have used a little more systematics.

Instead, the book tells anecdotally and in plain language how, under favorable conditions, unfounded boasting and genius acting with sufficiently gifted believers achieve exactly what the great ego strives for - at considerable social costs, of course. The goal is to create something completely unbelievable, but which must not simply turn out to be private madness and therefore needs the band form: permanent empirical confirmation through repeatable social reconstruction of the madness. That's why bands have always been able to do the best art on the planet. Anyone can claim to be a complete alien who turns all the rules upside down, but only a band can ratify that. All it takes are lucky coincidences to document the fragile social sculpture as music.

The fact that the results are then available to everyone, the many enthusiastic, confused, puzzling fans who make connections, at some point deprives the Arcanum of its structure. When too many people know too much about the ladder one climbed (or projected onto) the throne of genius, the social construction of the great mystery crumbles. Now you should actually be able to enjoy it as absolute art. But even today, when listening to "The Dust Blows Forward And The Dust Blows Back", too much unexplained social energy sloshes out of the speakers. That spoils the pure enjoyment of today's retro cults.