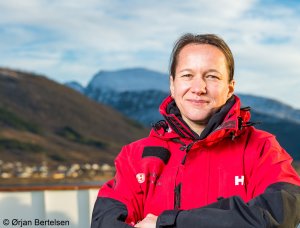 Why did you study earth sciences?

I had geology as an elective at school and I found it super interesting. On a study trip to school we passed an outcrop with fossils, that’s it - geology was the ultimate course for me: exploring nature, exploring the earth, being outside.

Geosciences / geology holds so many exciting stories, rocks and fossils are like a window into a long time gone by - way markers to decipher the formation of our landscapes.

Bergen is the starting point of the Hurtigruten ships along the traditional Bergen-Kirkenes mailboat route, and every evening I saw the ships sailing along the fjord from my window.

After the 2-year postdoc project, while looking for a job, I came across an advertisement from Hurtigruten: "Job as a cultural or nature mediator along the coast". As part of the expedition team, giving lectures on nature and geology on a ship, accompanying hikes and explaining nature, that sounded good. Although I enjoyed working at the university, I wanted to be outside more. So I started going to sea. However, it didn't go along the coast, but into the Antarctic - but who says no? 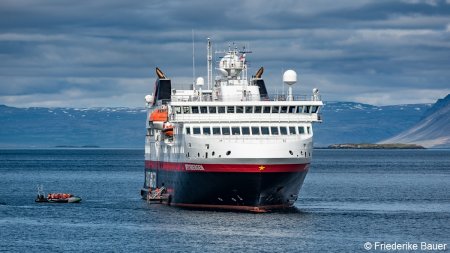 But what do you actually do on expedition voyages?

Roughly speaking, one can say that regular cruises call at different ports, with excursion programs and animation programs on board.

Expedition voyages sometimes also go to ports, e.g. in Iceland, but mostly natural landings, so with rubber dinghies it goes from the ship to land (tenders). The animation program consists more of edutainment than entertainment. There are popular science lectures on the areas we travel to. That sounds simple, but it isn't, because explaining geology, biology, history, archeology, etc. to a mixed audience in such a way that everyone understands and not everyone falls asleep can be an art. We also have a science center on board with various microscopes, from transmitted light binoculars to high-resolution stereo microscopes, to look at thin sections or the smallest sea creatures.

This is where the scientists in the team are in demand - we have almost all disciplines on board, from glaciologists to biologists to oceanographers, some of them guest scientists, as we support projects with universities and also carry out citizen science projects on board. There are also historians and activity guides, as we also do kayak trips, hikes and much more.

The whole team is required for the landings. For example in Antarctica there are no ports that we go to, only beaches. The water is not always calm, but it is always cold. The guests are brought ashore in the rubber dinghies, where they go out and off. A part of the team helps to hold the boats in position and to help the guests out and in, another part is positioned above the landing point to see that everything is going smoothly. Because of course there are strict guidelines that we adhere to, be it in the Antarctic, the Arctic or somewhere in between. Don't leave anything behind, don't take anything with you, respect nature, don't get too close to the animal kingdom ... This is a challenge, especially with penguins, because they are super cute. But there are distances that have to be respected, as well as right of way, which are relatively simple, penguins are always right. In the Arctic, there is also the exciting factor of polar bear watch. The area has to be "screened" in advance to make sure that we don't run into a polar bear at the landing site, which would not be a good idea. Guards are then positioned on land to keep an eye out for polar bears - should one actually be spotted, an orderly retreat is made and the landing is aborted. 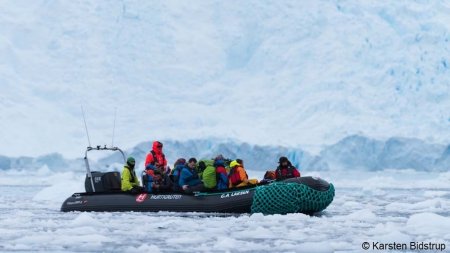 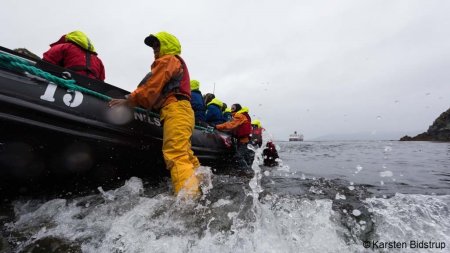 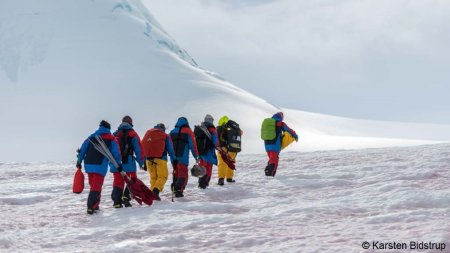 And this is where the expedition leader comes in:

In addition to all of the above, my role is to look after guests, give instructions, coordinate the team and make sure that all rules are adhered to, primarily safety. If, for example, a polar bear appears, I have to sound out the situation quickly and make and communicate decisions. A termination due to a polar bear has not happened often in my 5 years at Hurtigruten, because our binoculars are our best friend. The situation is checked in advance for a good hour before we go ashore and continue to observe there. An abort due to a change in the weather can also occur if the surf threatens to become too strong, the wind increases, ice drifts in. All of this needs to be kept in mind.

The higher-level travel program is checked, including the landing sites. The program for the next day is explored every day, as it is heavily dependent on the weather and ice. In the course of the day, the first course goes to the ship's bridge to get an overview of the conditions. Ice conditions, wind, animals - if the landing site is occupied by seals, penguins or a bear, a plan B must be approached, as well as if ice blocks the landing site or too much wind or swell makes tenders impossible. The guests are then greeted by an announcement and a status quo, and the day can begin.

This is a rather brief glimpse into the world of work - of course, there is a lot of administration involved, also from the home office, because trips are subject to strict rules that you have to familiarize yourself with. There is nothing like good preparation!

What do you enjoy most about your job?

The work in the expedition team, with the ship crew and the destinations we travel to (from the Arctic to the Antarctic and a lot in between, such as Iceland, the Canary Islands and Chile). I love being on the water and I enjoy being outside hiking and exploring. Passing on the fascination for earth, animals and nature and conveying the respect for it, to open one's eyes to everything that life apart from our civilization holds, is a great task that I enjoy doing.

What are the challenges of your job?

It is a major challenge to reconcile sea travel and sustainability. I love animals and nature, and that's why I want to pass on my enthusiasm for them to our guests on the one hand, but also my respect for nature on the other. As an expedition leader, I have a leadership position, which involves a lot of planning and administration, and at the same time I have to spend enough time to look after our guests and to be present, because personal contact with guests is super important and fun. I've already met so many incredibly nice people, some of whom I'm still in contact with.