Soap with long-term side effects?

Antibacterial, but harmful? The chemical triclosan can be found in many soaps, toothpaste and shampoos and was previously considered tolerable. But now experiments with mice indicate that triclosan can damage the liver in the long term and maybe even promote liver cancer. It is therefore urgently advisable to avoid this chemical in widespread consumer goods, warn researchers in the journal “Proceedings of the National Academy of Sciences”.

The antimicrobial active ingredient triclosan is contained in a large number of everyday products, including toothpaste, liquid soaps and deodorants, but also in cosmetics, in antimicrobial textiles and plastic cutting boards for the kitchen. The concentration of the triclosan in these products may be up to 0.5 percent in Germany, depending on the application. This chemical is now so ubiquitous that it can be found in the blood, breast milk, and urine of most people in developed countries.

However, concerns have recently increased. Two years ago, studies with mice showed that triclosan can drastically impair muscle function even in low doses. Mei-Fei Yueh of the University of California at San Diego and her colleagues have now uncovered another negative effect of triclosan.

Collagen instead of liver cells

For their study, the researchers gave a group of young mice for eight months food containing 0.08 percent triclosan. They then examined the condition of their liver and the gene expression of the liver cells. The investigation showed that the liver was abnormally enlarged in the mice fed triclosan. In addition, genes were active in the liver cells that stimulate cell division, but also lead to liver fibrosis. 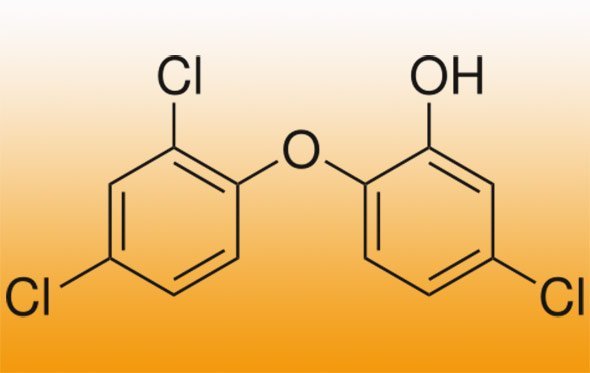 Formula of Triclosan or, in chemical terms, 5-chloro-2- (2,4-dichlorophenoxy) -phenol © in the public domain

During this pathological change, which is accompanied by inflammation, liver tissue is increasingly converted into collagen. This impairs the liver's blood-cleaning function and can lead to liver cancer in the long term, the researchers explain. In another experiment, mice that had received triclosan were found to be more susceptible to a cancer-causing drug. They developed more and larger tumors than the control animals that had only received the carcinogen.

Harmful consequences can also be expected in humans

According to the researchers, their results suggest that long-term exposure to triclosan can cause liver fibrosis and other inflammatory changes in the liver in humans as well. "It is advisable to check whether long-term exposure to triclosan is also a risk factor for liver fibrosis in humans," said Yueh and her colleagues. However, they think it is quite likely that the chemical can also significantly increase the risk of liver cancer in humans.

“In view of the ubiquity of triclosan, we expect that liver cancer induced by this chemical can occur in humans as well as in mice.” They therefore consider it sensible to avoid this chemical, at least in everyday products. (Proceedings of the National Academy of Sciences, 2014; doi: 10.1073 / pnas.1419119111)