What makes a genre unique?

The manga culture of Japan can boast a huge number of fans living in all countries of the world. A question that manga readers abroad keep asking themselves is, “Why Japan? What is so special about the Japanese system that it is able to produce one high quality masterpiece after another? ”In this post we take a look behind the scenes and introduce some of the factors that make Manga Made in Japan an artistic one Make a genre that is characterized by great diversity and depth and stands on an equal footing with literature and film.

Close cooperation between artist and publisher

One reason that is often cited in connection with the high quality of Japanese manga is the prominent role played by the editor. The first phase of series production of any manga begins with the artist and editor sitting down to talk about a story. Then the artist creates a rough storyboard called the "name". In this phase the manga consists only of rough sketches that reproduce simple drawings with dialogue text. Only when the publisher gives his approval to this draft does the actual work on the manga begin. In this phase, the further course of the story and the development of the characters must also be decided. Depending on the type of manga, the artist will now conduct interviews and further research. If the artist doesn't know what to do next, the editor is the perfect contact for advice. Many mangas have been upgraded to a higher level of quality through early advice from the editor. From the artist's point of view, the editor is a creative partner and close friend who shares his or her concerns and ensures that the work progresses quickly. It is said that the publisher has a 30 percent share in the success of a manga.

In Japan, the publisher also acts as a link between artist and reader. For example, he visits bookstores to personally inquire about the opinions of readers, or he conducts research to find out how readers react to the individual episodes of a manga after they have appeared. This type of feedback can have a direct impact on the further development of the manga. The publisher also acts as a promoter who organizes readings, distributes souvenirs signed by the artist, and thinks about how sales can be further increased. Another important aspect of the job of an editor is discovering and nurturing new talent.

The Made in Japan system that creates outstanding manga

The unique system with the editor at the center that exists in Japan's manga world plays a decisive role in the worldwide success of the manga. A good example of how this system works is the voting system used by Manga magazine Shonen Jump was introduced. Each issue of the magazine is accompanied by a postcard with which readers can tell the publisher their favorite series. Based on this vote, the publisher creates an order of popularity for each series for the next issue, with the most popular series at the beginning of the magazine. Not so popular series are often discontinued due to such votes. The editors of other magazines are similarly uncompromising. Once readers have lost interest in a story, a magazine is very unlikely to continue series production of that story - regardless of the artist's level of awareness.

Kenichi Nakada, a Japanese manga editor with many years of experience at Shogakukan Publishing, one of Japan's leading publishers, said Japan's unique infrastructure for publishers is one of the main strengths of the manga industry in Japan: “I think it is It took almost half a century to build the system that exists today, which is capable of producing such a large amount of high quality manga. The huge inventory of old manga is another strength of the Japanese manga industry. We can look back on a long history of trial and error - in all genres a wide variety of ideas have already been tried. It is therefore quite natural that this great wealth of ideas is a great advantage for manga from Japan. " 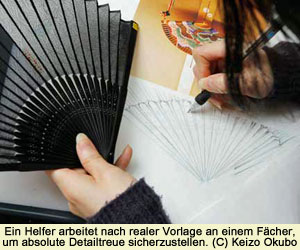 Competition is another important element in Japan. At least that's what Kyoko Kumagai, one of the best-known manga artists under Nakada's wing, thinks: “The aim is always to be better than the others in order to achieve a really big success. This spirit of competition drives the artists and helps to further improve our skills. [...] Talented helpers are also very important. I currently run two series that come out every two weeks. Each episode has 30 pages. I couldn't do all the work alone, so I always work with five helpers. The small details are important, such as the background of a picture or objects that the figures are holding in their hands. The quality of the entire product suffers if the details are neglected. So I always insist that everything is done right, right down to the smallest details. "

It is thanks to the unique Japanese system of the central role of the editor and the passion of the artists and writers who are completely dedicated to creating manga that Manga Made in Japan has developed into a worldwide phenomenon.