What is the CO2 offset point 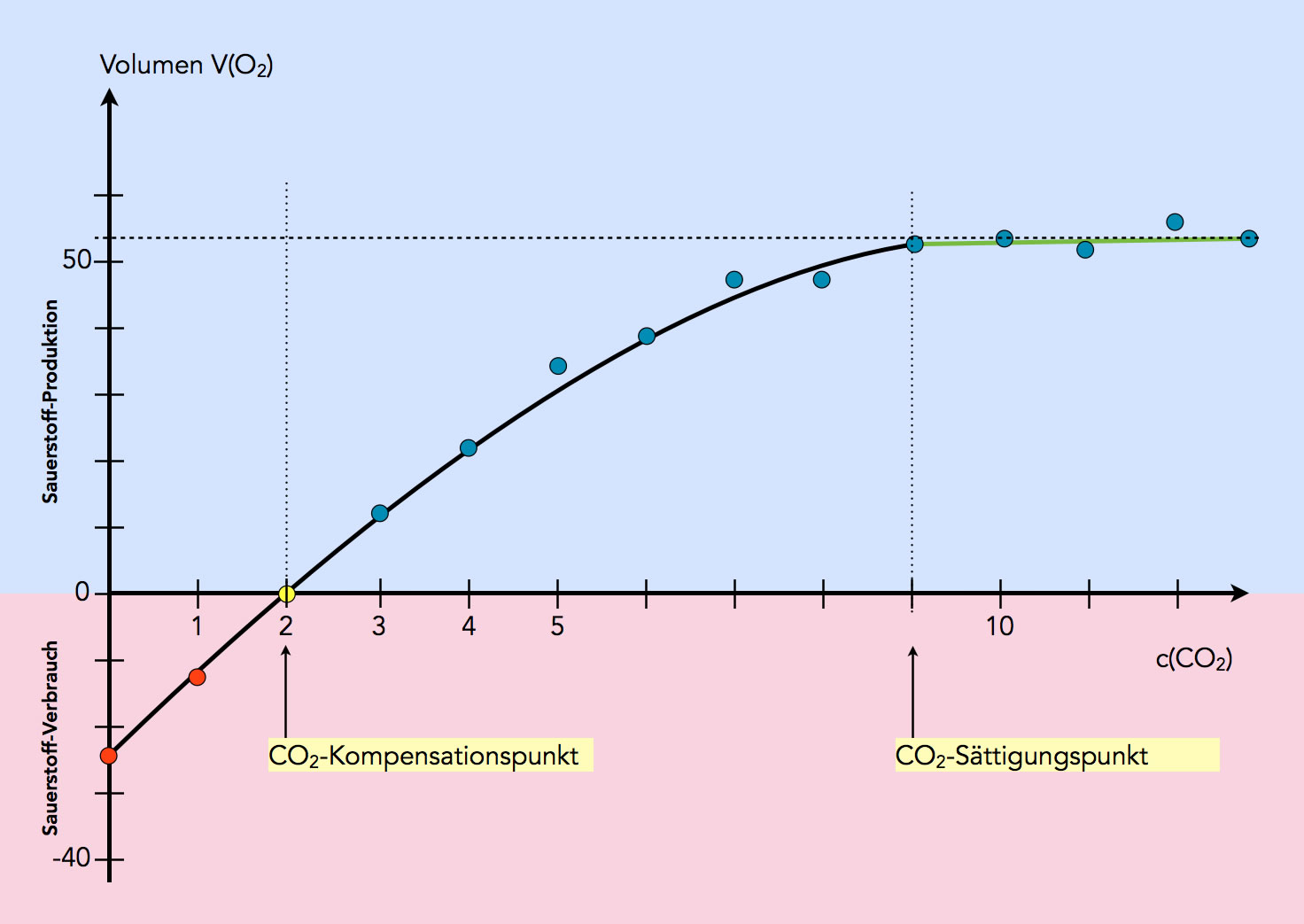 Dependence of the photosynthesis rate on the CO2 concentration

I assume that you have read the page "Photosynthesis factor light intensity" or at least the lexicon article "Light compensation point". Then you will surely understand the graphic above quickly.

If no If carbon dioxide is dissolved in the water, the waterweed can of course not carry out photosynthesis. The gross photosynthesis therefore has the value zero. So that the plant still has ATP available for its various metabolic processes, it has to aerobically oxidize glucose, which of course leads to a consumption leads to oxygen. The net photosynthesis, i.e. what the skilled experimenter can measure in the end, is therefore in the negative range.

The photosynthesis taking place in the plant.

The carbon dioxide concentration at which the measurable net photosynthesis has the value zero.

Interestingly, the CO2-Saturation point (analogous to the light saturation point) far above the carbon dioxide concentrations prevailing on earth. The gardeners like to take advantage of this by fumigating their greenhouses with carbon dioxide. In this way they increase the natural CO, which is around 0.038%2-Concentration of the air and thus increase the photosynthesis rate of your crops.

Now another interesting task for the exam writers and high school graduates among you:

A green plant is hermetically sealed in a container that has no carbon dioxide in the air. Water and light, on the other hand, are sufficiently available, as are minerals. What will happen over time?

The plant will not perish! Since there is no carbon dioxide available, it will initially only breathe in order to ensure its energy supply. However, the plant should be equipped with enough reserve substances such as starch, otherwise it will die. When the plant now breathes, carbon dioxide is automatically released. However, since the vessel is hermetically sealed, the carbon dioxide collects in the air. Above a certain concentration, the plant can carry out photosynthesis and obtain new reserve substances from the carbon dioxide, which it then uses up again in its respiration in order to release carbon dioxide again, which it then needs again for photosynthesis, and so on. In other words - the CO2-Concentration in the glass levels off at a more or less constant value. As soon as there is too much carbon dioxide, the plant increases its photosynthesis, and so does the CO2- Salary is going down. Then again too little CO2 present, breathing becomes more noticeable and the CO2- Salary rises again.