How is alkene made from alcohol?

Formation of a carbenium ion

If an acid is added to an alcohol, the OH group is first protonated, then the protonated OH group is split off in the form of a water molecule. A carbenium ion remains. We already know all of this from step 1 of the SN1 mechanism of nucleophilic substitution.

This carbenium ion is quite unstable and "tries" to somehow lose its positive charge. There are two different ways of doing this. 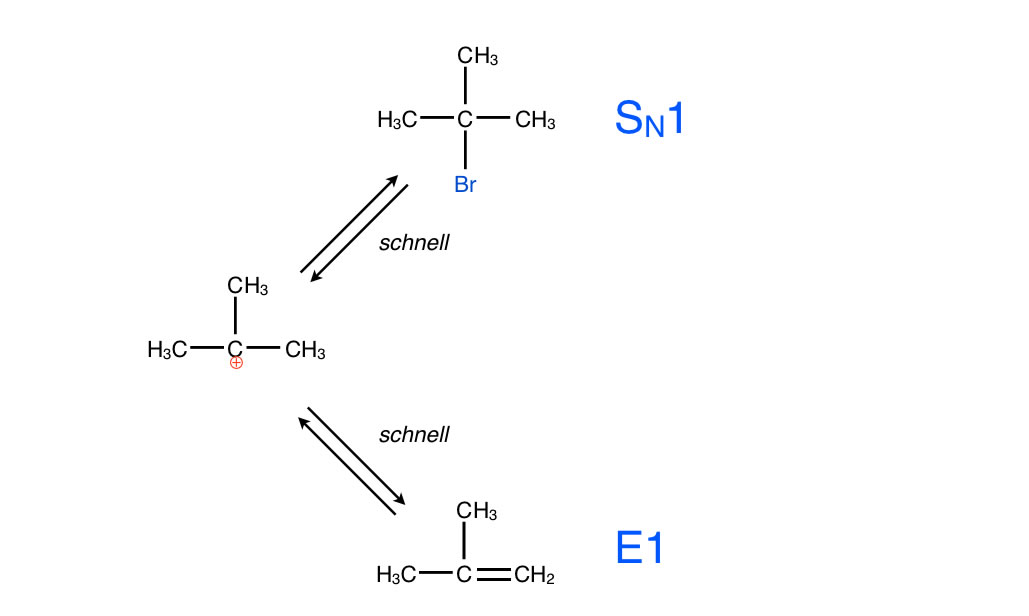 E1 elimination as a competitive reaction to SN1 substitution

Which of the two reaction pathways is chosen depends of course on the exact reaction conditions. If, for example, there are no anions in the reaction medium, then only the path of elimination can actually be followed. We will get to know another competitive reaction below, the ether formation.

We had just seen that the SN1 reaction is a competitive reaction to E1 elimination and vice versa. But even if no nucleophile is present in the reaction medium, an SN1 reaction can take place. The alcohol can react with itself. At lower temperatures, the carbenium ion reacts with another alcohol molecule as a nucleophile and an ether molecule is formed:

The ether formation is also an SN1 reaction

This type of elimination, in which a nucleofug as an anion or molecule is split off in the first step, so that a carbenium ion remains as an intermediate, is by the way not the only type of elimination that exists. This special mechanism, which can run in competition with the SN1 substitution, is also known as E1 elimination. E1 because the kinetics of this reaction is monomolecular. The cleavage of the nucleofug is the slower reaction step and therefore also the rate-limiting one. And since the speed of the first step only depends on the concentration of the organic compound, the first step is monomolecular, which means that the entire reaction is also monomolecular. In addition to E1 elimination, there is also E2 elimination, which will be discussed in more detail on the next page.

In the Central Abitur in North Rhine-Westphalia, elimination as a competitive reaction to SN1 substitution is dealt with in some tasks. One example is the 2007 task "MTBE anti-knock agent".

Overall, the keyword "elimination" occurs in a number of Abitur tasks, as the following screenshot of a spotlight search in the folder "Abitur Chemistry" shows:

Abitur exercises in North Rhine-Westphalia, in which the word "elimination" occurs

However, a search for "E1" or E2 "led to 0. For the chemistry high school in North Rhine-Westphalia it is obviously enough if you even know that there is such a thing as an elimination be.