University of the Media

Gamers are young, male, unmotivated, inattentive, neglected, have no friends and have an aggression problem. Fortunately, this cliché is now a thing of the past. Games have arrived in the middle of society and in some cases even have a positive image. But if you want to deal with the topic scientifically and psychologically, it will be difficult. Many studies on the effects of more or less excessive gaming are commissioned by political institutions and therefore hope for a certain result. The experimental setup can also have a huge impact on the result. The studies are often carried out by psychologists who may have little knowledge of games themselves, as Harvard professor Cheryl K. Olson explains in an interview with Spiegel Online. The aim here is to try to give a neutral and professional overview of this matter. 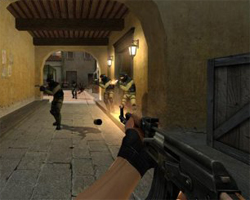 For years in the focus of educators: first-person shooters like "Counterstrike" (Photo via Amazon.de)
Studies that come to the conclusion that games have negative effects on children and adults are now extremely rare or poorly recognized. It is clear that gaming - like all activities that entice with systematic rewards - can of course also lead to addiction. This phenomenon is particularly extreme in South Korea, where, according to a study by the Korean government from 2006, 12.6 percent of all South Koreans between the ages of nine and 39 show signs of computer game addiction. MMORPGs (Massively Multiplayer Online Role-Playing Games) such as "World of Warcraft" offer great potential for addiction. Most studies on the negative influences of games say nothing about games themselves, but about so-called "violent games". Several studies show that when playing first-person shooters, brain activity in the area of ​​the brain that regulates fear and aggression is lower than in the control group. Excessive gamblers seem to have got used to images of violence. Even so, even "violent games" do not lead to aggressive behavior across the board. The social environment is much more important. Violent games hardly have a negative impact on young people with healthy peer groups. "From a scientific point of view, a general risk to adolescents through the consumption of depictions of violence in new media must be regarded as hardly existent," explains the Swiss expert report by the Federal Social Insurance Office. Likewise, a connection between games and the violence in schools or the attacks as in Columbine (Colorado, USA) or in Winnenden (Baden-Württemberg) has not been proven. The fact that soldiers, but also terrorists such as Anders Breivik, prepare for reality with first-person shooters leaves at least one last doubt as to whether so-called "violent games" are completely safe. 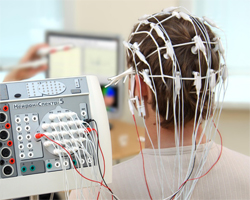 The effects of playing on the brain can be measured using an EEG (Photo via Baburov (Own work) (CC BY-SA 4.0 (http://creativecommons.org/licenses/by-sa/4.0)), via Wikimedia Commons)
Universities and colleges around the world are investigating the effects of gaming and reducing prejudices to absurdity. Numerous studies attest games have a lot of positive effects on people of all ages and from all parts of society. Those interested are already aware that gamers potentially have faster reflexes, can perceive their environment particularly well, are more creative, have an improved comprehension or better motor skills. Two studies carried out at the US University of Berkely in 2009, as well as many others, also prove this. Few studies refute this picture. Depending on the result, the experimental setup and perhaps the underlying political will are also relevant here. The previously mentioned Harvard professor Cheryl K. Olson surprisingly shows in her study that not playing is a sign of poor social skills - games also promote social skills. That may be unexpected and adds to the classic positive effects that are attributed to digital games. However, considering that many games these days can be played either locally or online in pairs or in groups, this makes sense. In multi-player games, each player must be able to rely on the other in order to achieve a common goal. If you play games against each other, ambition and the will to win are encouraged.

Gaming is therefore culturally valuable and by no means a damn hobby that has found its place in the middle of western society. In conclusion, it can be said that scientists largely agree that digital gaming demands and promotes the intellect and motor skills.

The editors of the HdM website look forward to your constructive comments - whether critical, praising or neutral. We reserve the right to check contributions before publication and, if necessary, to edit or reject them.

In exceptional cases, the exam can take a few hours.

Please note the following rules when creating your comment: