Why do you value Croatia

DW: Croatia has not recorded positive growth in a single year since the beginning of the financial crisis. Where is this long-running recession coming from?

Kevin Körner: The factors are different. In Croatia, domestic demand has fallen, both in terms of the demand component of private households and that of the state. Private consumption has plummeted, unemployment has risen sharply, and investments have fallen sharply. External factors also play a role, for example the persistent economic weakness of Croatia's most important trading partners.

The fact that Croatia has been hit so hard by this crisis cannot of course only be explained by this. The structural problems are also important - for example the lack of flexibility in the labor market.

How do you assess the situation of the Croatian banking sector?

Overall, the banking sector in Croatia is relatively well positioned when you look at how much equity a bank has relative to the investment side of its bank balance sheet. On the negative side, as a result of the economic crisis, the number of loans that could possibly default or have already defaulted is relatively high: it is around 14 percent of all loans.

The rating of Croatia is bad, the country is heavily indebted. What do you think the government can do to improve the situation?

The national debt in Croatia is around 60 percent of GDP - this is also the Maastricht limit, which is set as the upper limit in the monetary union. There are also different levels of debt that are considered sustainable for different countries. It is generally believed that less developed countries should have lower levels of debt than developed countries. The IMF assumes that this value should be around 40 percent of GDP - Croatia would be well above that at 60 percent. 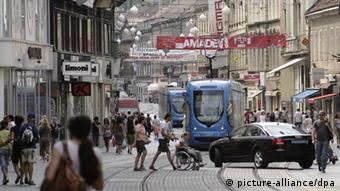 When it comes to new debt, Croatia has already improved a lot: in 2010 and 2011 new debt was over five percent of GDP, in 2012 it was possible to reduce it slightly and this year we assume that it will be reduced even further, to around 3 .5 percent. That is part of the government's effort to consolidate the budget. In times of crisis, however, this is always a problematic measure, because a decline in government investment or government consumption also negatively affects economic growth.

In your opinion, what structural reforms would be necessary?

The labor market should be opened up more. The public sector in Croatia is very large - the state is the largest employer. It has been announced that state employees will be laid off in the near future. Downward wage adjustments must also be possible if Croatia turns out to be "too expensive" compared to other countries in the region. It is also necessary to raise the retirement age. These are very sensitive issues, and politicians very quickly deal with the displeasure of the population.

What will change for the Croatian economy after July 1, 2013?

It is generally assumed that joining the EU will have a positive impact on economic development. After accession, Croatia has to adhere to the European guidelines - this promotes investor confidence. In the medium term, it is assumed that accession should have a positive effect on investments. The flow of investment is extremely important for a country like Croatia: FDI is a very stable flow of money that is beneficial to the economy.

Kevin Körner is an analyst in the research department at Deutsche Bank. There he is responsible for Southeast Europe.