What is a magnetization curve

If there is a magnetizable core in the coil, the course of the field lines is concentrated in the core material. As a result, the magnetic force of the coil through which the current flows increases when the current is constant. The magnetic field of the coil shifts the Bloch walls of the Weiss areas in the core material outwards. With increasing field strength, all Bloch walls are shifted to the core edge until it consists of a single Weiss area.

At the start of the test, the core material should be magnetically neutral. The magnetization curve shown above is run through when a ferromagnetic material is magnetized for the first time. The blue curve in the following picture is called the new curve, which goes into the saturation value for the material when the field strength is high. 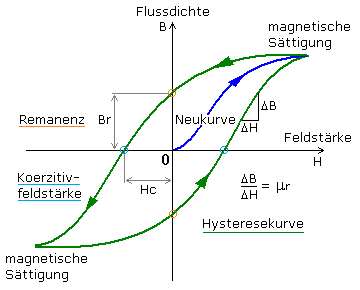 If the magnetic field strength is reduced starting from the saturation point, the return does not take place along the new curve. The flux density decreases more slowly and the new curve runs above the curve of the initial magnetization. With the field strength H = 0, the B-axis is intersected with the value Br. A residual magnetism, called remanence, remains in the core material.

The residual magnetism can be eliminated by an opposing field strength. The polarity of the excitation current of the coil must be reversed for this. The field strength Hc at which the flux density has assumed the value B = 0 is called the coercive field strength.

The states B = 0 and H = 0 before the first magnetization and B = 0 with H = ± Hc are not identical. In the first case it is assumed that there is a statistical orientation of all Weiss districts. There is therefore no measurable magnetic field to the outside. After the initial magnetization and subsequent demagnetization, it is assumed for the coercive field strength that the remanence cancels with a reorientation of some Weiss areas. The new curve of a material that has been magnetized once is no longer traversed.

The required field strength for each required flux density can be read from the magnetic state curve. The associated flow rate is calculated by multiplying it by the mean field line length. The magnetic flux is the product of the flux density and the cross-sectional area of ​​the core.

The curve shown is called a hysteresis loop (hysteresis in the sense of delay). If the excitation coil is connected to a sinusoidal alternating voltage, then the hysteresis curve is cycled through once. The molecular magnets are periodically reoriented and the Bloch walls experience a constant shift. These processes require energy that must be supplied as electrical power. The power to reverse the magnetization heats the core material and is referred to as the hysteresis loss. The greater the density of the core material and the higher the frequency of the excitation current, the more hysteresis losses occur. 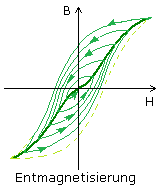 The demagnetization can be done by a steadily decreasing alternating current of higher frequency. The hysteresis loop is run through in a spiral-like manner up to the zero point with ever smaller H and B values. Above the Curie temperature, the material suddenly loses all of its magnetic properties, which is used in thermal switches. The Curie temperature for iron is 770 ° C, for nickel 360 ° C and for cobalt 1115 ° C. There are special alloys with significantly lower Curie temperatures.

Magnet coils on cores with an air gap are called choke coils. They oppose an alternating current with a high magnetic resistance, while direct current flows through the coil almost unhindered. Choke coils are used in clocked power supplies to store energy. In power packs with high output, their high magnetic resistance suppresses the frequencies of the so-called ripple voltage after rectification and serve to smooth the DC voltage. They are also used to limit the current in circuits with gas discharge tubes, for example fluorescent lamps.

These materials almost always have low permeability values, but significantly higher remanence values ​​and coercive field strengths. The hysteresis loop encloses a large area and a lot of energy is required to reverse the magnetization. Permanent magnets in measuring instruments, loudspeakers and previously used magnetic storage rings are made of hard magnetic materials. The quality of a permanent magnet is determined by the product of remanence and coercive field strength.

They are soft magnetic nickel-iron alloys with copper, chromium and molybdenum components from which sheets and wires are made. Magnetic cores are also made from metal powder, which is pressed into the final shape with electrically insulating binders and then subjected to a final annealing process. The permeability values ​​are between 25 ... 350, the maximum magnetic flux density at magnetic saturation is reached at B = 0.8 Tesla.

Ferromagnetic metal powders are sintered in a press mold with electrically non-conductive binders. The mutual isolation of the metal grains reduces the occurrence of large eddy current losses. Compared to the core made of laminated sheet metal, the insulation material in the metal powder core forms air gaps that are widely distributed and reduces the magnetic conductivity. Manufacturers specify a permeability factor for the linear working range of the core material. Powder cores only slowly reach magnetic saturation. They are particularly suitable in storage chokes of switched-mode power supplies, where switching voltages of higher frequencies are superimposed with direct voltages.

They are ferromagnetic alloys made of iron, nickel and molybdenum, which are mixed as metal powder with electrically insulating binders and harden to their final shape in a thermal pressing process. The saturation values ​​of the magnetic flux density are between 0.8 ... 1.6 T. The permeability is not too high between 15 ... 550. The powder cores are suitable for frequencies up to 0.5 ... 2 MHz.

At higher operating frequencies, lamination of the magnetic cores is no longer sufficient. The magnetic reversal losses increase proportionally with the frequency and with the likewise increasing eddy current losses, the magnetic core heats up too much. This can be remedied by further reducing the size of the magnetizable areas in the core materials, which at the same time have to be electrically isolated from one another.

Ferrites are characterized by a very low electrical but very good magnetic conductivity. They are ceramic sintered materials made of mostly trivalent iron oxide Fe2O3 with the addition of bivalent metal oxides such as NiO, MnO, CoO and ZnO. The starting components are sintered and finely ground until the grain sizes are in the range of the Weiss areas. The powders are pressed into their final shape and sintered again under protective gas. With their very high specific resistance values, they behave like electrical insulators. The eddy current losses therefore remain very low even at high frequencies. Compared to ferromagnetic materials, they have lower relative permeability values.

Soft magnetic ferrites have a narrow hysteresis loop. Their saturation induction is 0.35 T. The losses during magnetic reversal and the coercive field strength are small. They are used in the cores of choke coils, transmitter coils, in resonant circuits, filters, pulse transformers and electromagnetic converters. The tape heads of magnetic recorders are made of ferrite. They can easily be remagnetized and have almost no residual magnetism.