How long have you been in Madurai

“You will fall in love with Madurai,” cries Petra, who hurries behind me with her heavy backpack through the crowd at the Trichy bus station.
How does she know? Has India's spirituality affected you so strongly that Petra can already see into the future? And even if: I'm not even looking for a man!
My strength in the heat is not enough to express this complex train of thought. "Huh?" I call back to her.
“Madurai is supposed to be the soul of Tamil Nadu,” cries Petra. "The travel guide says that we will lose our hearts to this city."
I see. I am reassured.

We squeeze past a stand selling greasy samosa vegetable dumplings and fragrant hot pakoras. Although the shower water from the Krishna Inn has not dried long on my skin, I notice a trickle of sweat running down my back.
“Maderimaderimaderi!” Shouts a man in a khaki uniform like a machine gun. "Maderimaderimaderi!"

Petra stops with him. "Excuse me, mister. Is this the bus to Madurai? "
He moves his head back and forth a few times. Weeks ago we would have assumed that he would have answered the question in the negative. Now we know: Yes, this is our bus.
We climb the steep steps into the interior of the bus, take off our backpacks and drop onto the seat.

Madurai, Petra explains to me, is said to be the secret capital of Tamil Nadu.
"As Cologne residents, we are in the right place here," I say. "After all, we also think that we live in the secret capital."
“I'm not from Cologne.” Petra looks at me indignantly. "I'm North German and only live in Cologne!"
That's right, after all, she was born in Jarmen in Meckpomm.
But haven't the years in the cathedral city rubbed off a bit?

A couple is sitting on the other side of the corridor. The young woman, almost still a girl, has fine features, her shiny black hair peeking out from under the scarf of the sari. She turns around to us, smiles and nods in greeting. Then she hands us a bag with square sweets made from peanuts and caramel, which are also sold at the stalls in the train station, and which melt deliciously on your tongue.

"Maderimaderimaderi!"
Apart from the battle cry of the bus driver, we hear a buzz of voices, horns and approaching cars. Through the cloudy front window, on which POINT TO POINT is written on the outside and a sticker with the rounded features of Shiva sticks on the inside, we see some men running, who shortly afterwards climb the inside of our vehicle.

The man in the uniform now climbs into the cab and lets the engine roar. There is a strong smell of gasoline. He blows the horn a few times - an almost unbearably loud siren sound. It's so hot that the colorful hippie skirt I bought sticks to my legs and we both sweat on our plastic bench, even on our forearms.
The driver maneuvers backwards out of the bus parking space with so much momentum that we almost knock our teeth out on the metal bar on the front seat.
Petra and I look at each other.
“I love traveling by bus in India!” We shout at the same time.

The couple leans back. The man puts his arm around his sweetheart, his hand lies casually on the armrest.
How nice! The bus driver turns corners as if this was his very last trip - and here in the bus, not only Petra and me are warming with happiness. With the airstream we cool down a bit, the feeling remains.

After a four-hour drive with a pee break and flying visits to all the small towns along the way, I finally spot the word Madurai on the dusty billboards on the roadside. A little later we lurch through a street that seems to make its main income from selling onions.
“If you want to cry, maybe you should come here,” says Petra dryly.
"Cry? Should I fall unhappily in love with this city? "
She laughs and shakes her head. “In any case, love goes through the stomach. Hunger?"
A brilliant idea. I love Indian food very much. So much so that I'm happy about the trousers with elastic waistband that a tailor made for me in Mamallapuram.

After we have deposited our luggage in the accommodation, we start looking for food. The guide suggests a restaurant nearby. We look for it with the book in hand.
“Where you headin?” A tall, strong man with light skin and a baseball cap stops us. Ami? New Zealander? Australian?
Canadians - and traditionally also lumberjacks.

We start talking, and since Christopher is also plagued by hunger, we are soon afterwards in his favorite inn, the Sri Sabareesh near the train station. It almost overflows with people to whom the kitchen boys present a banana leaf, on which they slap rice, papadams and colorful, fragrant sauces and a kind of spicy potato salad from various pots. A typical Indian lunch, this thali that is always refilled as long as you are hungry.
"Mmmmmh." Petra sticks some rice with sambar into her mouth with her fingers, followed by a little spicy mashed potatoes.
I'm already full, but still nibble on a chilli pepper dried in brine, not at all spicy, rather aromatic.

Christopher was at Osho's Ashram with his mother as a child.
“I spend the winter here,” he explains. "Is cheap, and what should I sit at home if I have no work there anyway?"
He is interested in religion, language and history and so he is looking for new reading - so much so that he sends a few kilos of books home every year. He plans to go to the book fair in Calcutta.
“You have something in common,” cries Petra delightedly. "Anne is a writer and she goes to the Frankfurt Book Fair every year."
Her eyes shine as her gaze wanders back and forth between us.
“The post office prices have risen, however, this year it will probably be less,” he says, wiping his mouth with his hand. "Maybe only twenty kilos."
The guy is nice. But when does he just want to read all of this?
“There are just so many interesting books,” he says, and tells of one that is supposed to prove that all religious leaders were actually yogis.
I frown. If only I had known that when I was dealing with the subject of religion.

“Do you want to go to the temple?” Asks Christopher.
“Oh yes,” cries Petra. "Anne will definitely find it great if you come with us!"
Well why not.
On the way to the temple, she follows us at some distance. Christopher and I have a lively conversation, but I keep looking back to see if it hasn't been lost.

Sri Meenakshi Temple is one of the most beautiful we have seen so far, the food was some of the most delicious we have ever eaten, and Madurai has a comfortable pace, a very relaxed atmosphere.
Still, something seems to be wrong with Petra. She is so quiet.

“Are you okay?” I ask her as we admire the ceiling decorations in the temple.
"If you would like to spend more time together, then I'll just do something alone." Petra looks at me expectantly.
Why is she suggesting - I'm here with her, aren't I? “But he definitely doesn't have time. All the books he still has to read. "
"I think you care," she says.
I shrug my shoulders.

Only when we're back on the road does my penny drop. "Oh, you mean Christopher could be the reason I fall in love with Madurai?"
“Of course, he's pretty. And woodworkers. It can even lift a tall woman like you. "
I have to laugh and shake my head.
Christopher is nice. I don't know if he would be a man for me.
What I do know, however, is that Petra's years in Cologne actually rubbed off on her. Or at least the carnival, which is mainly about one thing.
I start humming a familiar tune.
"We love life, love and lust ..."
Now Petra has to smile too.

I let my eyes wander. I like the hustle and bustle around me. An Ayurvedic pharmacy that overflows with pots, tubs and jars. An art shop that sells dark and painted woodwork. A group of women with colorful saris and some men drinking chai from small glasses in front of a house.
Yeah i'm ready to fall in love
Maybe first in this city. 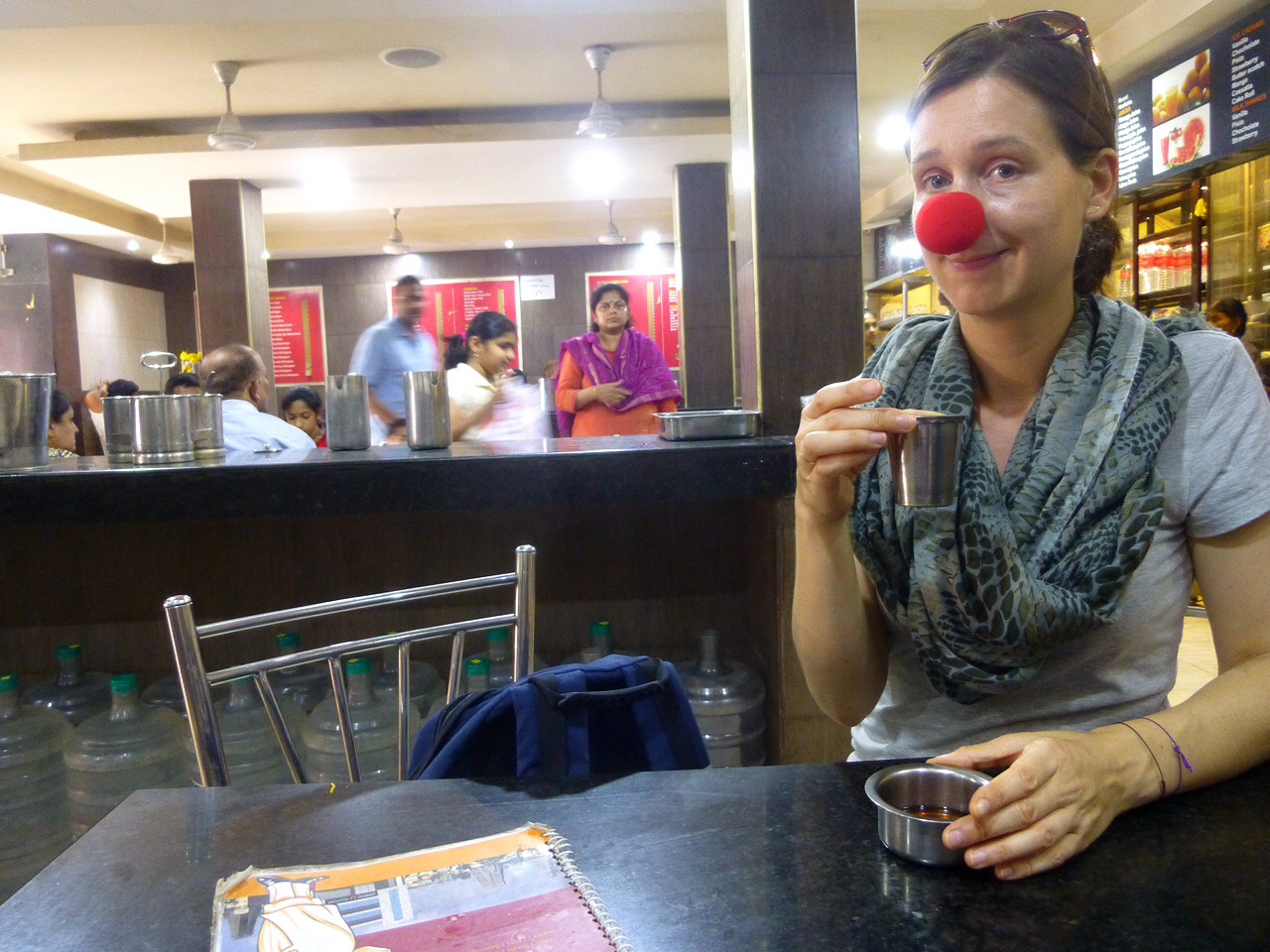