Dogs "think" very differently than humans
You can't talk like us.
They are guided by their instincts and the behaviors they have learned from humans.
They cannot think as we do

You too don't like it when someone pulls your ears or your hair, tries to dig your nose,
step on your toes or just kiss you when you don't feel like it. 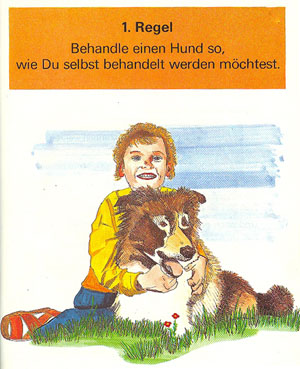 And please: don't yell at a dog!

Because dogs smell better and hear better than we do, they are great

sensitive to their noses and ears. They even like it
don't like it when someone stranger touches her.

And something else:
Dogs have very good memories. A dog that only
small and cute is later than the great mastiff or St. Bernard
don't forget who once annoyed him as a puppy dog. 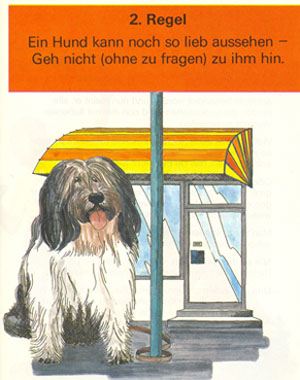 If the dog wants, he'll come to you on his own. Many dogs love children because they're so easy to play with.

But:
How should the dog know that you mean well with him of all people. Perhaps this dog in particular was treated badly by a child with blue trousers and long hair and now he thinks that all children who look like this should be treated with extreme caution.

Maybe his neighbor Peterle (he looks almost like you) threw stones at him. How is he supposed to know you aren't?

Or the little Karin from opposite (she is just as big as you) just pulled his tail so angry yesterday. That hurt him a lot - how should he know that you don't want to pull his tail?

You never know what experiences a dog has already had. So better:
Therefore - never go to a dog without first asking the owner. 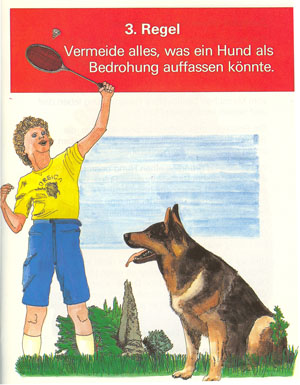 The dog regards us humans as a kind of "super dog". We're a little different from him, but we live with him - so we have to be something like that.

The better or stronger are above him, the weaker or worse are just below and have to obey him.
So better: don't challenge a dog! Refrain from threatening gestures! 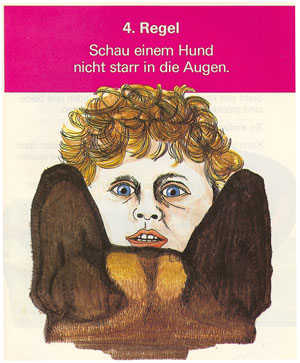 When two strange dogs meet, they first try to agree on their position in the hierarchy that is so important to them.

There are various means of doing this.

"Looking yourself in the eye" is a very important means. The two dogs stare into each other's eyes, one turns his head away, the other is satisfied and both are happy that they don't have to fight.
If nobody can make up their minds to look the other way, then you have to fight to maintain the rank.

Therefore - never look a dog straight in the eye, because it challenges it to a fight. 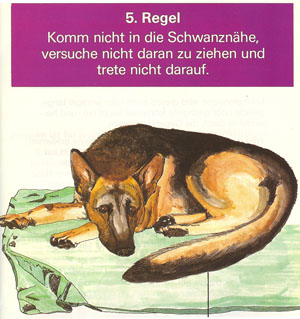 It is not that easy for us to grasp what the tail means to the dog because we do not have such a thing.

It is only clear that the tail is, among other things, an important means of expression for the dog. Just as we underline our language with our hands, the dog complements its "language" with its tail.
Therefore - never step on or pull on the tail 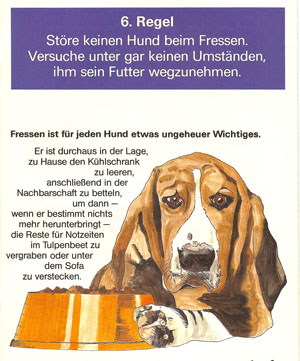 Even as a small baby, our puppy learns to fight more or less vigorously over the food.

Even as an adult, our dog will very emphatically assert its right to the much sought-after food. He will defend his fodder - by all means.

So - dog food is not that good either - stay away from the food bowl! 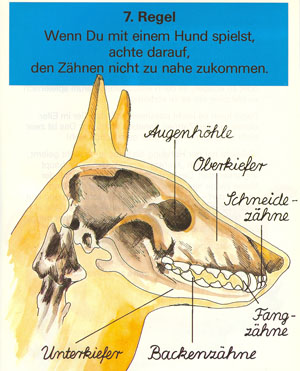 Even old and gray dog ​​leopas and omas seem to get young again when it comes to running after a stick or ball.

There is nothing better for dogs than to catch or chase something, then hold onto it and playfully fight to defend it.

It can easily happen that the dog snaps its teeth in the middle of it. This is not meant badly, but it hurts a lot.

Therefore - don't get too close to the teeth! 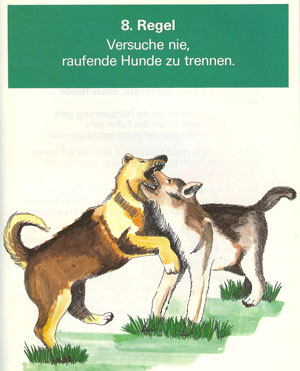 Many dogs also like to play with other dogs. They can feel like you sometimes do - suddenly the game becomes serious. One "word" results in the other and a real scuffle is going on.

The dog is almost blind, deaf and numb in battle. That's why he doesn't even notice when he's biting into a hand that is actually trying to help him. Adults too have to be very careful not to be accidentally bitten by either of them.

Therefore - never intervene in a scuffle, no matter how sorry you are for your darling, but call one, or even better two, adults. 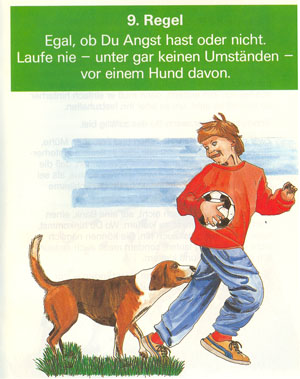 First, the dog is faster anyway. Second, every dog ​​has a chasing or hunting instinct. He can't help it, that's his innate instinct

Incidentally, it does not help to climb on a bench or table (except for very small dogs), they can not only run very well, but also jump well.

Every mistress or master must ensure that his dog does not bother or chase after anyone, but if it does happen - never run away from a dog. 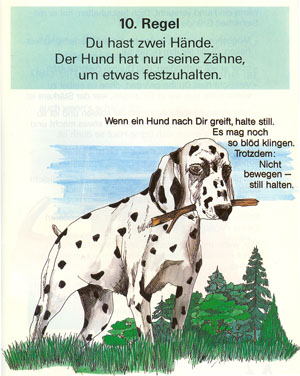 Most dogs don't want to bite at all, they just want to hold on.

It can hurt a lot, but it is usually not that bad if you keep still.

Take a look at one of those dog teeth. All larger teeth point inwards. Sure, if you try to pull something out, you get stuck and that can cause quite a lot of injuries.

Therefore - no matter how difficult it is to stay calm and move as little as possible, something that does not move is usually of no interest to the dog. 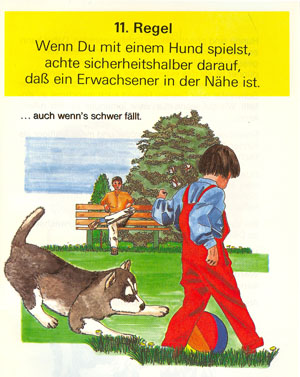 Dogs are fantastic playmates. But it can happen that because of all the games they forget that people's "fur" is much thinner than their own.

Adults are bigger and usually stronger than children. For the dog, this automatically means that they also have more "to say".

Therefore - only play with a dog (including your own) if there is an adult! 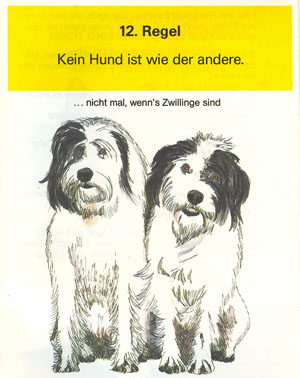 Fritz and Franz are twins. Not only are they just brothers, they are exactly the same age to the day and they look confusingly alike.

Nevertheless you can play really well with Fritz and there are always arguments with Franz.

It's the same with dogs. Two dogs that look alike can be very different.

That's why you have to get to know each dog anew. If the dog shows you that he does not like your acquaintance - let him.

Therefore - no dog is like another, you first have to find out if he likes you.

If you follow these rules, there should be no problems with dogs

There are very few dogs that are inherently bad.
Dog experts agree: if a dog is unfriendly to a person, then people have done something wrong.

Usually dogs are our friends!