Why are mycorrhizas not harmful?

Mycorrhizas are used more and more in the garden. We show what mushrooms are all about and how to use mycorrhizal fertilizers correctly.

In autumn, when the leaves turn their beautiful colors and the sun is lower in the sky, the time for mushrooms has come. But what do the strange contemporaries do in the rest of the year? And what does the subterranean part of a mushroom actually look like? Both questions are of great importance for plants, because mushrooms lead a mysterious life underground. Let yourself be surprised what mycorrhizal fertilizer is all about.

If you grapple with the topic of soil fertility, sooner or later you will come across mycorrhizal fungi too. These mushrooms have a huge effect on the soil and plants and play an important role in organic agriculture. But they also achieve notable effects in your own garden. In the meantime they can even be found in the trade as preparations under the name “mycorrhizal fertilizers”.

What is mycorrhizal fertilizer?

Mycorrhizal fertilizer is actually not a fertilizer at all. With the so-called mycorrhizal fertilizer, the soil is only inoculated with a certain fungus. To do this, spores and hyphae, the subterranean network of the fungus, are mixed into a substrate such as expanded clay, which you can then easily spread out in the garden. Then a widespread fungal network develops underground and unnoticed by you.

And now comes the essential part, because the fungi enter into a relationship with the roots of your plants. Often nutrients such as phosphorus and magnesium are present in the soil, but the plants themselves are often unable to absorb them in sufficient quantities. This is due to the fact that these nutrients are not freely available in the soil solution, but can only be absorbed through direct contact with the roots. The mycorrhizal fungi solve this problem by increasing the surface area with their huge network and thus absorbing nutrients and passing them on to the plant. Mycorrhizal fungi are sometimes even able to dissolve nutrients bound in rock and make them available to the plant. In return, this gives the mushroom a considerable amount of glucose.

The soil is not fertilized directly, but the plant still has a lot more nutrients available. Incidentally, a symbiosis with mycorrhizal fungi is not the exception in nature, but the rule. Researchers suspect that it was only because of this close connection between fungus and plants that the latter were strong enough to survive on land.

By the way: The mushrooms you can pick in the forest in autumn are just the tip of the iceberg. They too have a wide network of fine hyphae underground. Many of our edible mushrooms supply entire trees with nutrients without being noticed and serve as a link between the roots of different plants.

Properties and effects of mycorrhizal fertilizer

All the effects mycorrhizal fungi have on plants seem almost magical. The most important is probably the supply of nutrients. In particular, phosphorus, which is difficult to find for plants but is usually more than sufficient in the soil, is supplied by the fungus. But mycorrhizal fungi can do even more. Plants that enter into a symbiosis with the fungi are healthier, stronger and significantly more resistant. These plants benefit particularly in drought conditions or in soils contaminated with salt or heavy metals. Fungi can even help with some pests or diseases. Some of the mysterious mushrooms, for example, have specialized in catching and eating nematode worms, while others, as it were, strengthen the plant's immune system.

It gets really strange when you look at it on a higher level. Mycorrhizal fungi usually associate not just with one plant, but with several. That makes them important links between them. Plants are able to exchange information via this link. In addition to all these effects on the plant, the fungi also ensure that the structure of the soil is greatly improved thanks to their fine meshwork - this in turn is of course ideal for your plant.

The fungi can be divided into two groups: On the one hand, there are the ecto-mycorrhiza, which form a dense network around the roots of the plants and do not penetrate the root cells. This group of fungi is particularly found in symbiosis with trees. Herbaceous plants are mainly populated by so-called endo-mycorrhizae. This group of mycorrhizal fungi penetrates the root cells to ensure a good exchange between nutrients and carbon. Representatives of this group are grown and sold as fertilizers.

What can mycorrhizal fungi do?

Advantages and disadvantages of mycorrhizal fertilizer

As a special kind of fertilizer, inoculating mycorrhizal fungi has various advantages for you as a gardener and your plants.

What are the benefits of mycorrhizal fertilizer?

Unfortunately, like so many other things, mycorrhizal fungi have a few - albeit a few - disadvantages.

What are the disadvantages of mycorrhizal fertilizer?

In a healthy soil with active soil life, mycorrhizal fungi are naturally present. Especially in cities, where gardens are often made from excavated construction, or on areas that were previously intensively used and dug up, the mushrooms are often in short supply. To speed up their spread and improve the soil, a little mycorrhizal fertilizer can go a long way.

Instead of a mycorrhizal fertilizer, soil activators with mycorrhizal spores are also a very good way of getting the garden soil back into shape. These not only bring mycorrhizal fungi into the soil, but also ensure that they feel good. Our Plantura organic soil activator meets these criteria and does not contain any animal ingredients. It ensures a higher humus content in the soil and supports soil fertility. It can be used in the vegetable patch as well as on lawns or for new plants. 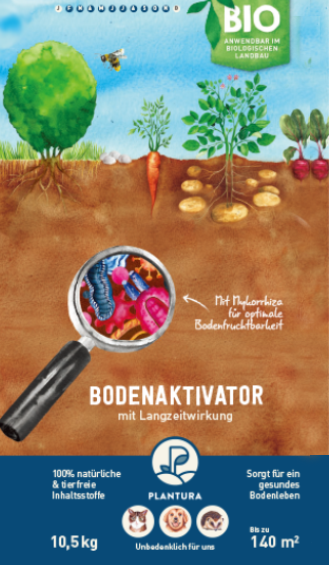 In contrast to normal fertilizer, it is not enough to simply use it according to the package insert. Mushrooms are living things. So the conditions have to be right, otherwise the fungus will be gone as quickly as you brought it underground. The most important thing to know about mycorrhizal fungus application is the following.

What should be considered when using mycorrhizal fungi?

You can find more information about our Plantura organic soil activator with mycorrhizae here.

Register now for our free gardening post and receive great gardening tips and inspiration regularly in your email inbox.

I am a trained gardener and studied horticultural science and I love everything that grows and green! Regardless of whether it is a shrub, a tree, a useful plant or a supposed weed: every plant is a small miracle for me.
In the garden I look after my 13 chickens, grow fruit and vegetables and otherwise watch how nature manages and shapes itself.
Favorite fruits: blueberries, apples
Favorite vegetables: stewed cucumber, kale, green peppers