What is meant by control?

An approach to testing complex systems

The development in the field of document management systems tends towards more and more efficient and complexly organized systems. This means that auditors, auditors and controlling departments are increasingly confronted with the verifiability and ongoing controllability of such systems. The following article presents a basic audit concept with the components process documentation, internal control system and audit techniques.

The most important components of open systems can be characterized by the flow of the considered flow variables through a system (see Fig. 1). The flow variables flow into a system under consideration (input), are then processed (process) and then leave the system again (output). A control mechanism (control), which is the subject of cybernetics1, is intended to ensure through regulatory interventions that the system works according to the objectives [Föll, Lüsch, Unbe].

Fig. 1: Components of open systems (representation according to DIN 66001)

The term information is only precisely defined with the aid of the terms "data" and "messages". An information system can thus also be understood as an ordered network of elements that exchange information with one another based on formalized communication processes.

Regulatory mechanisms in the information system

In order to find an approach to how control mechanisms work in open information systems, cybernetics with its independently operating regulation and feedback mechanisms must be used again (see Fig. 2). 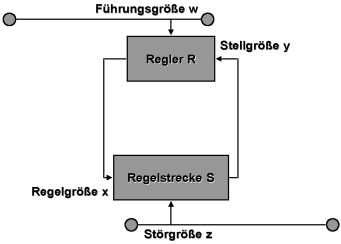 Figure 2: Basic model of a control loop Information systems can now be described as a single higher-level control loop.

Since there is no uniform definition of the term examination in the theoretical examination literature, "examination" is defined as follows: Examination is:

In addition, the term audit must be distinguished from the two terms "control" and "internal control system". Controls are all those measures that are directly built into the operational processes, i.e. process-dependent or accompanying processes, which not only provide information about the existence of target-actual deviations, but also independently trigger corrective measures and thus correct the consequences of incorrect developments or even of can avoid in advance.

The decisive difference between testing and control is that controls take place during the process and that they do not end with the issuing of judgments about determined deviations from target and actual values. Based on the definition of the test, the control process can be expanded to include the phase of initiating corrective measures, with the additional difference, however, that tests are process-independent and controls are process-dependent, i.e. parallel to the controlling operational processes. The test, on the other hand, is primarily a snapshot.

A more detailed description of the tasks of an internal control system is provided by the definition of "Internal Control" in the Statement on Auditing Standards (SAS) No. 1 of the American Institute of Certified Public Accountants (AICPA). Accordingly, an internal control system is understood to mean the entirety of all coordinated internal measures and methods that serve to:

Representation of an overall monitoring system

The three central forms of monitoring operational processes - the internal audit, the internal control system and the external audit of the annual financial statements - as an audit carried out by persons outside the company on a private basis and based on statutory audit standards, should finally be represented as monitoring systems with the help of control loop analogies. 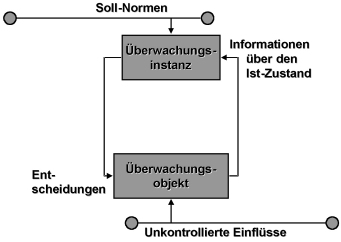 This monitoring system is characterized by the identity of review and decision-making bodies, i. In other words, the target / actual comparisons as well as the corrective decisions required in the event of discrepancies are taken from the same point. This monitoring instance thus fulfills all the described characteristics of a control, so that this type 1 monitoring system corresponds to the definition of an internal control system.

A type 2 monitoring system differs from type 1 essentially in that the monitoring instance is now split up into a review and decision-making body. The auditing body is organizationally subordinate to the decision-making body and receives target norms for carrying out target / actual comparisons, which are derived from a defined system-internal overall objective; Determined target / actual deviations are communicated to the decision-making authority as a review judgment, which can then exert a corrective influence on the monitored object. An internal audit department assigned directly to the company management as an auditing body represents the typical case of such a type 2 monitoring system shown in Figure 4. 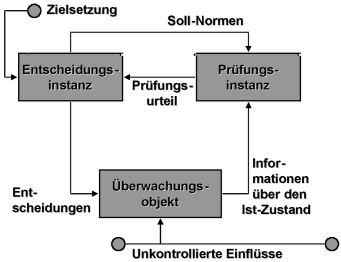 The third type of possible monitoring system is based on the organizational separation of the monitoring function into an auditing and decision-making body, but also removes the audit tasks from the sphere of influence of the internal company bodies making the corrective decisions. This is done by locating the auditing body outside of the system to be monitored, carrying out audits on the basis of externally specified target standards and reporting the results to the decision-making body in the form of an audit opinion. 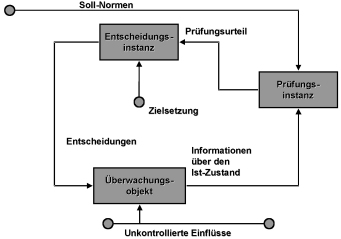 Such a type of monitoring, as it presents itself, for example, in the form of an annual audit, primarily serves an independent audit in the interest of those persons who cannot exert any direct influence on the monitored object itself.

Building on the described control loop analogies, a model can now be derived which represents a monitoring system that encompasses all three types and thus, in relation to operational applications, the internal control system (type 1), the internal audit (type 2) and the annual financial statement audit (type 3) involves. Figure 6 shows the corresponding control loop model graphically. 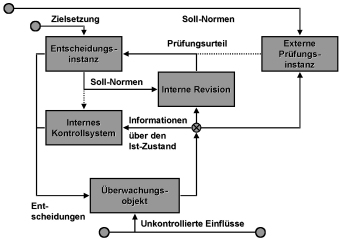 The model is taken up in connection with the TÜViT acceptance of safety management systems (SMS), to be characterized in more detail below, and discussed with regard to its elements and the possible relationships between the various monitoring bodies.

The entirety of all safety-related activities and goals planned, carried out and controlled by company management is referred to below as safety management (SM).

From a management point of view, the conception and implementation of security measures lead to the achievement and maintenance of an appropriate security level in the provision of services. The possible consequences of the loss of security make the following management tasks obvious [Idw]:

The security policy, understood as comprehensive intentions and objectives for security, is implemented through security management.

From the point of view of security, it is crucial that the measures outlined are appropriate, clearly justified and implemented as described. In addition, information is required on how this implementation is achieved and maintained during ongoing operations. The organizational structures, procedures, processes and resources required to implement security management form the security management system (SMS, see Figure 7). 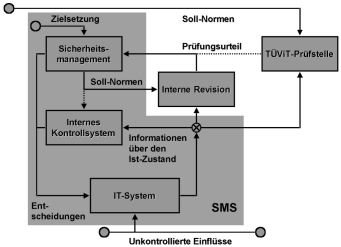 Based on and analogous to the qualification of an ICS, an SMS can also be validated by a "neutral third party". On the basis of the necessary procedural documentation [Kam1, Kam2]. a test statement about the SMS can be determined by means of a system-technical qualification (system test) on the basis of defined criteria.

Thus, the audit goals or audit goals correctness, (functional) safety, economic efficiency, quality (and legal) of the SMS can be determined.

Dipl.-Ing. Berthold Weghaus is responsible for information security at

TÜV Informationstechnik GmbH. He is Deputy Head of Information Security and Head of the Testing Center for "Electronic Payment Transactions".