What are the formal characteristics of art

About the basics of artistic representation 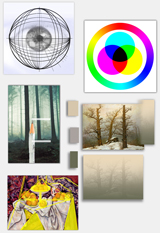 Everyone perceives pictures, their composition, their colors or their style differently: according to their own taste.
The famous works of art exemplify how the subjective, artistic perspective shapes art.

Theoretical image design cannot be the goal, but only the way.
If you deal with it, you understand the effect of the picture from the ground up and get ideas to express your feelings differently.

An example of a successful expansion of creative possibilities is the rediscovery of perspective in the Renaissance: the laws of perspective enabled painters and draftsmen to present their art differently and more effectively. The new perspective was the means to an end to depict impressive art.

Since the beginning of modernism, artists have tried to reinterpret topics in a new and even more subjective way with their individual style, a special choice of color or painting style, but also through unusual compositions.

Whether in painting, drawing, photography or film, the same picture elements always determine what is depicted. If you want to understand art or create it yourself, it is helpful to understand these formal creators more precisely.

In the following, the elements are discussed and image ideas are given: