How does a single LCD pixel work

How an LCD cell works

The electromagnetic waves of light that vibrate unaffected in all spatial levels are called unpolarized. A polarization filter can filter out a certain level of oscillation and linearly polarized light is obtained. If this light hits a second polarization filter of the same type, also called an analyzer, it depends on its position whether light is allowed through or not. If both filters are at an angle of 90 ° to each other, no light will escape from the analyzer.

Most polarization filters absorb the vibration levels of the incident light, which they do not let through. They convert this light energy into self-heating. Newer polarization filters have a linear aluminum grid. They reflect the majority of the light whose plane of polarization does not correspond to that of the filter. There is therefore hardly any warming.

Each LCD cell consists of two polarization filters. They are at an angle of 90 ° to each other. The first filter only lets through linearly polarized light and the second filter blocks the light exit. There is a layer of liquid crystals between the filters. Its natural property is to rotate the vibrational plane of light. The LC layer is just thick enough to be able to rotate the light between the two polarization filters by 90 °. The light can pass through the second polarization filter and the associated image point becomes bright. If the LC molecules are rotated from their normal position by applying an electric field, less light passes through the cell and the image point provides a gray value. From a certain field strength, the liquid crystals align themselves parallel to the light. No more light can get out of the cell. The pixel becomes almost black. 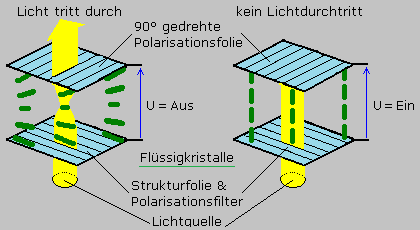 The LC cells are produced as TN (twisted nematic), SNT (super twisted nematic) and DSNT (double super twisted nematic) cells. The difference lies in the number of twists of the light within the LC layer. The following sketch shows the electrical control of the individual cells according to the older principle of a passive matrix. A transparent electrode grid runs above and below the liquid crystal cells. A capacitor is created for each individual cell at the intersection surfaces. Control electronics change the state of charge of the capacitor cell and the crystals align accordingly. This technology is no longer used in modern flat screens. 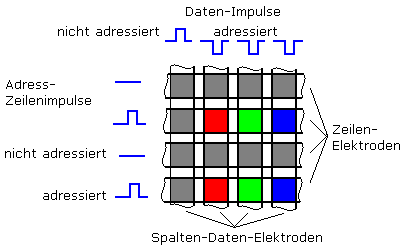 The high local electric field of a capacitor can transfer charges to neighboring cells that are not activated. This also activates these cells slightly. The visible consequences are noticeable as a loss of contrast and as trailing effects in fast-moving images. The latter are known as 'crosstalk'.

The current principle uses an active matrix with the thin film transistor, TFT technology. The liquid crystal layer is covered by an electrically conductive silicon film, which has the properties of a transistor for each pixel cell. The transistors and their control electrodes are on the same substrate. This means that each individual cell can be controlled more precisely and more quickly.

The transistors are connected to address lines for the rows and columns. The opposite glass substrate is provided with a large, transparent electrode which forms a common connection for all transistors. If a row electrode receives a pulse, all transistors in this row are activated in preparation for the following addressing. A corresponding pulse from a column electrode then activates the cell. Due to the charging of the capacitor, the cell remains in its state until the transistor is switched off in a subsequent pulse cycle.

The transistors are controlled with a sample and hold circuit. Each pixel can be kept in the same switching state or changed during the image repetition cycle. There are no more ghost effects, the images are more brilliant and the viewing angle in front of the display is larger. There is an opaque mask between the pixels. It prevents stray light and the image appears more contrasty.

The following illustration outlines the schematic structure of the thin-film transistor as a MOS-FET and the electrical connection with the liquid crystal cell. Pixel defects are caused by defective insulation between the row and column electrodes. Unlike passive displays, they are on the same side of the layer. This results in line crossings. If their insulation is defective at the intersection, the pixel remains on or off all the time.

The following picture shows a section of a TFT-LCD. At the same time, it shows how colored images can be displayed. Each individual image pixel consists of three sub-pixels for the primary colors red, green and blue. The color is created by colored foils through which the light from the activated pixels falls. The RGB film is below the analyzer film. The color of the image pixel is created by additive color mixing when light passes through the three subpixels.

Each monitor panel is manufactured for a fixed resolution according to its number of pixels. Lower image resolutions can be displayed. Since the downgrade is not linear as an integer, the image sharpness suffers. The addressable pixel cells are missing for higher resolutions and adjustments by software solutions do not deliver good results.

15 inch flat screens usually have an optimal resolution of 1024 × 768 pixels. Since each of the 786,432 pixels consists of three subpixels, there are a total of 2,359,296 individual pixels on the display. The same number of transistors is required for control. When viewed with a strong magnifying glass, the sub-pixels can be seen on the screen. In between runs a fine line network showing the electrical 'wiring' of the transistors. The standard are 16.7 million colors and 256 levels of gray. The response time is given as <20 ms from white to black. In many cases, shorter response times of around 5 ms can be read, which relate to a change between non-standardized gray states.

The display area with a 15 inch screen diagonal corresponds to approx. 70,000 mm2. Each subpixel thus occupies an area of ​​approx. 0.03 mm2. The transistor occupies around 10% of the cell area. The fineness of the structure is enormous, because about 333 transistors would be 1 mm2 Take up space.

Like monitors, LCD projectors only function with much smaller panels to generate images. The simpler devices can be compared to a slide projector. The TFT-LCD element is located in the place of the slide. A distinction is made between 1.8 inch (4.5 cm) and 0.9 inch (2.3 cm) panels. The normal projectors have 1.8 "panels and small portable devices 0.9" panels. Resolutions of up to 1024 × 768 are possible for both. There are also models with a 1.3 inch (3.3 cm) panel and large projectors with 6.5 inches and more.

High quality projectors have three TFT-LCD elements. The white projection light is divided into the three basic colors with the help of dichroic mirrors. Such a mirror reflects the light of one color and allows the remaining light to pass through. The RGB color extracts are passed through individual panels and then directed to the projection optics via deflecting mirrors and other dichroic mirrors. This technology is cheaper because TFT-LCD elements can be used without color filters. With the same panel size, the resolution is 3 times better. 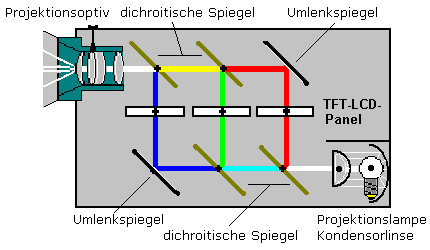 First generation projectors used amorphous silicon to control the pixels. The material is very light-sensitive and the transistors of the a-Si had to be covered from the light. This created a grid on the projection surface. Each pixel of the liquid crystal cell was surrounded by a fine black border. Panels with a very high resolution and a large number of pixels produced poorer images. Only the pixels and not the transistors could be made smaller, making the edges appear larger overall.

Polycrystalline silicon is used in newer projectors. It is insensitive to light and the transistors no longer have to be covered. Higher resolutions of up to 1280 × 1024 (S-XGA) can be achieved. The light transmission of 8% for a-Si-TFTs could be increased to around 20% for p-Si-TFTs. Devices without their own light source are available in flat design for use on overhead projectors.

Data projectors mostly have a stripe arrangement of the pixels. The representation of individual letters in the projection is thus better. Home theater projectors often have a delta arrangement. As a result, the individual pixels are less noticeable.

Advantages and disadvantages of TFT-LCD technology

advantages
The images shown are absolutely flicker-free in any room lighting.
The images are sharp, bright, rich in contrast and overall free of distortion.
Flat screens take up only a fraction of the floor space of CRT monitors. Some models can be attached to the wall with special brackets.
They are insensitive to the usual electromagnetic fields in the environment. These fields do not produce any color distortions and no annoying flickering.
TFT-LCD displays emit almost no measurable electromagnetic radiation. You do not burden the user and do not disturb any devices in your neighborhood.
With <60 watts, flat screens have a low power consumption and little heat generation.
TFT-LCD displays have a larger visible image area than corresponding CRT monitors. A 15-inch flat screen is roughly the same as a 17-inch CRT monitor.

disadvantage
The side viewing angle is smaller with flat screens than with CRT monitors. If the viewing direction is shifted to the side, the color, brightness and contrast change. Modern TFTs achieve viewing angles of up to 160 degrees.
Flat screens only deliver an optimal picture with their native resolution. A 15-inch TFT flat screen, for example, is optimized for 1024 × 768 pixels. For a different resolution, the number of pixels is interpolated and the image appears blurred.
Flat screens have longer switching times from white to black than tube monitors. The manufacturers indicate the shorter switching times between gray levels. With CRT screens, the change from black to white to black takes less than 5 milliseconds. The TFT-LCD panels need another 20 milliseconds for this.