How do children think babies come from?

Rules of conduct for babies, children and pregnancy

During pregnancy, the pregnant woman should not go to the theater and only look at beautiful people, so that your child will also be quite beautiful.
She must not be frightened and touch any parts of the body so that the child does not get a birthmark.
In particular, the mother must not be frightened of the fire so that the child does not get a fire mark.
Moles in the child are caused by pinching and pinching the expectant mother.
So-called mouse pelts are created when the pregnant woman is startled by a mouse and claws when a chicken flies in the mother's face.
A harelip is formed when a grain of grain flew into the mother's face while threshing and touched the lip.
You always have to protect the mother from being terrified, otherwise the child will get the "evil being".
If a child cries a lot, the mother often cried during pregnancy.
Snacking and stealing are inherited by children.
If the woman vomits a lot during pregnancy, it will be a girl.
Infants were placed in the child's basket, laundry basket, or cradle and covered with as many blankets as possible and placed near the stove. The pacifier was made from a piece of linen and filled with rusks, sugar and chewed bread crust and put in the child's mouth. If the mother wanted to gossip, the pacifier was dipped in schnapps to let the child sleep longer and more peacefully.
A drink from the cogs on the poppy cap was considered a sleeping potion for the child.
Never forget to say "God forbid" after praising the child's appearance.
When asked about the condition of the child, one must never say yes or no, only always "not called".
The midwife gets a coin put in the bath water when the child takes a bath. Back then it was at least one thaler. That brings happiness to the child.
The godfather had to give the midwife a good tip after the baptism.
If the child cries during the baptism, the godparents did not like it.
If the godparents eat well, the child will also be a good eater.
How many more baptisms can be expected in the year depends on the ringing. As many children come as the bell rings.
In Mülverstedt it was customary when a mother with the Thuringian carrying coat and the baby came to visit the neighborhood, it was given the "Truei" as a gift everywhere so that it would "flourish".

What can you not do with a child in the first year of life?
You can't take it to the cemetery or it will die.
Not even in the cellar, otherwise it will go to jail.
You mustn't take it out of the window or hand it in, otherwise it will be a beginner.
The children become mirror monkeys if you let them look in a mirror.
Two children are not allowed to kiss otherwise they will not learn to speak.
You don't cut your fingernails, it would cost your life.
One bites off fingernails.
Likewise, the hair is not cut off, one cuts off the mind.
A child no longer grows when you step over it.
A child must not go out in the rain, otherwise they will get freckles.
A child under one year of age must not be beaten, otherwise nothing will be fruitful.
A child must first get their teeth at the bottom, not at the top, otherwise it will grow backwards, i.e. towards the grave.
If you come to a house with a toddler, you absolutely have to sit down, otherwise you take the child's peace and quiet.
In the first 9 days of the child's life, nothing should be hidden from the house.

Customs around the wedding 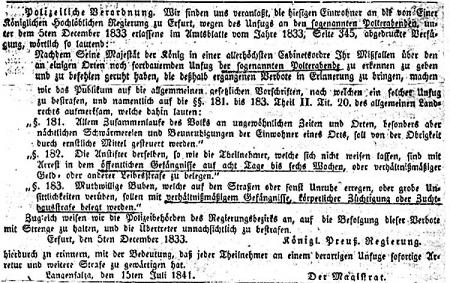 [Excerpt from the Langensalzaer Zeitung from July 15, 1841 on the topic of bachelorette parties.]

The day before the wedding, the hen party is celebrated. The newspaper clipping of the Langensalzer Zeitung of July 14, 1841 shows that this did not always please the authorities

Fortunately, this tradition has been preserved for all guests to this day.

If a bride and groom comes out of the church after the wedding, it is repeatedly "hammered" along the way and has to be triggered by the inhibition fee. Children hold a ribbon across the street and thus prevent the wedding procession from proceeding. Small coins are the reward for the children.

In order to avert misfortune, marriages were not allowed to be concluded during the waning moon, under the sign of Cancer (which goes backwards), on no 13th and never on Friday.
The bride and groom were not allowed to turn around in church and on the way to church, then they then turned to another spouse and part of the bride and groom must die.
A glass or cup has to break at the wedding party - broken pieces bring luck.
On the day following the wedding anniversary, friends and acquaintances who have sent the bride and groom a present are invited to the spinning room.
Every leaf mate (member of the wood community) was married to a so-called To administer cake tree. It was intended to prevent the lack of fuel for the wedding preparation and the wedding feast itself. Another custom of the foliage cooperative was to deliver two birch trees to decorate the village. 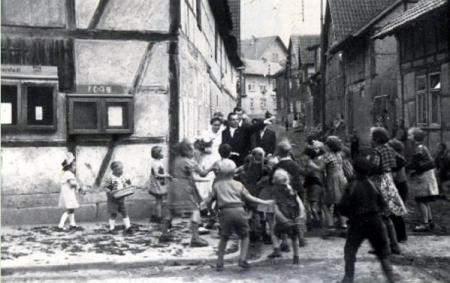 [The bride and groom are inhibited on the corner of Kirchgasse. The groom throws change among the children so that they can clear the way.]

Hiccups mean that another is thinking of you.
Humming or ringing in the ear means someone is talking about him. Ringing in the right ear is a good thing, ringing in the left ear is a bad thing.
If you never eat, you will learn something new.
If someone has said something and someone never eats it, it says "he enjoys it" and it is an affirmation.
If the right inner palm itches you get money, if the left palm is it you spend it.
Lead is poured on New Year's Eve, you can see the future in it.
The girl also goes to the chicken coop on New Year's Eve and knocks on the door. "If the rooster cackles you get a man, if Henn cackles you get to know it".
There has to be something green to eat on Maundy Thursday.
Water scooped up on Easter Sunday should strengthen and refresh and not let it age; poured on the seeds, it is also good for them.
Grain must be sown before sunrise, and not a word is allowed, then the mouse will not bite off a thread.
On the doorstep of the room door you will find a horseshoe which brings luck to the house.
A horseshoe over the entrance to the stable is designed to protect the cattle from disease.
If thirteen people are seated at table, one of them will soon die.
If someone has a table leg in front of them while sitting at the table, they will get an angry mother-in-law
Anyone who knocks over salt on the table will be disputed throughout the year.
A straw in the room means a visit.
If a knife falls from the table to the floor and gets stuck, you get a visitor.
You may not pour a guest if the cup or glass is not empty, otherwise they have to wait another 7 years until the wedding.
Lightning does not strike where a swallow builds its nest.
At the sight of the first swallow in spring you should roll yourself over so you don't get sick.
Flies in the house in winter were not killed because it was the money flies.
An owl in the house was killed because it was a bad luck animal and yelled "come with me" to the sick person.
The wings of an owl were nailed to the barn door to protect the barn from lightning strikes.
When the cat is cleaning itself, visitors come.
If the dog howls it doesn't mean anything good. If he howls in a high-pitched voice, a fire breaks out, someone with a low voice dies. If he howls when the bell rings, someone will also die.
If a rabbit comes across you are out of luck all day, so you have to turn back.
When you hear the cuckoo calling in the forest you have to count the calls, because that is how many years you live.
If you hear the cuckoo calling for the first time in the year you have to jingle the change in your pocket, then you won't run out of money.
When shooting stars fall one should make a wish.
Where the rainbow ends is a pot of gold.
Children have to be at home when the sun goes down, otherwise Mummeratz will get them.
Wheat in the village has to be ordered before sunrise, otherwise the sparrows will eat it.
When the moons are waning, you have to order peas on Wednesday or Saturday, otherwise they will not cook until they are soft.
If the tower clock strikes while the bell is ringing, someone dies.
If one sees flaming fire in a dream, one has to expect luck, with a smoking fire, misfortune
If you dream that you have fallen into the water, it means grief.

If a friend was entered into a cattle shed, the good looks of the cattle should not be praised too much or, better still, an unmistakable "notorious" message was said when crossing the threshold. This was to prevent damage to the cattle.
A bouquet of various wild flowers, picked on Midsummer Eve (June 24th), hung up in the house protects the yard from misfortune.

The twelve nights - the sub-nights

These fall from December 25th to January 6th. You shouldn't wash your clothes these days and especially not attach any lines, otherwise a relative will hang himself within the next year. The Christmas cookies must not burn during this time, they bring bad luck. One should not eat legumes, this brings disease.